It had been a very stressful few weeks with my body beginning to fail. I’ve had gestational diabetes, obstetric cholostasis, massive fluid retention and suspected pre-eclampsia but I am very proud to announce that my 2 beautiful baby girls arrived safely via a planned sunroof exit at 38 weeks and 4 days.

I have felt no end of guilt for the final few weeks as I’ve barely been able to move from the sofa. My two lovely boys have watched ridiculous amounts of television and entertained themselves beautifully and for that I am forever grateful. They have meant these last few stressful weeks passed as easily as possible. I’ve promised the boys that once Mummy was better she would try and be a proper Mummy again.

My plan was never to have a c-section but nature has a strange way of telling you to do something for the best. I was absolutely heartbroken when we went for our final scan and twin 1 was still flexed breech. I remember the snotty, sobbing mess I became in my consultants office. Not a good look! All along we had planned a breech delivery of both twins but now number 1 had her knees out, our plan went out the window. She was not budging!

I came home and got straight on Facebook to my Mummy friends looking for words of reassurance. They all spoke really positively about c-section and how I didn’t need to feel like a failure. It can still be special.

After my initial heartbreak at needing a c-section, I am pleased to report that I really enjoyed the experience. That sounds really strange as it’s such a major operation but, it’s true. My consultant could see how upset I was and planned to give me as natural section as possible. I had my husband with me the whole time which is a good job as I’m terrified of needles and was not looking forward to the spinal. He held my hand and tried his best to distract me while the job was done.

Twin 1 (also known as the problem child for being the cause of my c-section) arrived straight onto my chest where I got my first cuddle of her while they cut her cord. The plan had been to give me a few minutes with twin 1 before her sister made her big arrival but my placenta had other ideas. It started to come away so twin 1 was quickly passed to Dad before a second slimey baby was placed on my chest. At just 2 minutes apart and weighing 7lb 5oz and 7lb, my beautiful twins I and L had entered the world. 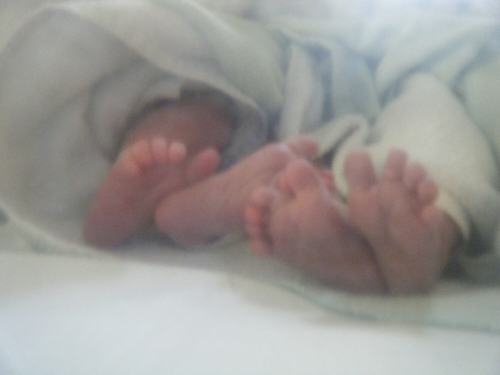 My twins never left my side and I’m over the moon about that. Since discovering we were expecting twins, my biggest fears had been premature arrival and stays on special care. I gave birth to 2 average size singleton babies, not the scrappy and fragile little twins I imagined. I am so grateful that my body did it’s job and cooked these twins for long enough.

3 thoughts on “A Twinnie Birth Story”